STEWARD MEETINGS ARE HELD ON THE FIRST THURSDAYOF THE MONTH AT THE UNION HALL AT 6:30PM

This section was created for when carriers need to find information out for when there filing a EEO. The U.S. Equal Employment Opportunity Commission (EEOC) is responsible for enforcing federal laws that make it illegal to discriminate against a job applicant or an employee because of the person's race, color, religion, sex (including pregnancy, transgender status, and sexual orientation), national origin, age (40 or older), disability or genetic information.The Website for the EEOC can be accessed at the following link:

Discrimination is defined as the unjust or prejudicial treatment of different categories of people or things, especially on the grounds of race, age, or sex.

Age discrimination involves treating an applicant or employee less favorably because of his or her age.

Disability discrimination also occurs when a covered employer or other entity treats an applicant or employee less favorably because he or she has a history of a disability (such as a past major depressive episode) or because he or she is believed to have a physical or mental impairment that is not transitory (lasting or expected to last six months or less) and minor (even if he or she does not have such an impairment).

The law requires an employer to provide reasonable accommodation to an employee or job applicant with a disability, unless doing so would cause significant difficulty or expense for the employer ("undue hardship").

The law also protects people from discrimination based on their relationship with a person with a disability (even if they do not themselves have a disability). For example, it is illegal to discriminate against an employee because her husband has a disability.

Note: Federal employees and applicants are covered by the Rehabilitation Act of 1973, instead of the Americans with Disabilities Act. The protections are the same.

The EEOC enforces Title II of GINA (dealing with genetic discrimination in employment). The Departments of Labor, Health and Human Services and the Treasury have responsibility for issuing regulations for Title I of GINA, which addresses the use of genetic information in health insurance.

Race discrimination involves treating someone (an applicant or employee) unfavorably because he/she is of a certain race or because of personal characteristics associated with race (such as hair texture, skin color, or certain facial features). Color discrimination involves treating someone unfavorably because of skin color complexion.

Race/color discrimination also can involve treating someone unfavorably because the person is married to (or associated with) a person of a certain race or color.

Discrimination can occur when the victim and the person who inflicted the discrimination are the same race or color.

Religious discrimination involves treating a person (an applicant or employee) unfavorably because of his or her religious beliefs. The law protects not only people who belong to traditional, organized religions, such as Buddhism, Christianity, Hinduism, Islam, and Judaism, but also others who have sincerely held religious, ethical or moral beliefs.

Religious discrimination can also involve treating someone differently because that person is married to (or associated with) an individual of a particular religion.

Sex discrimination involves treating someone (an applicant or employee) unfavorably because of that person's sex.

Pregnancy discrimination involves treating a woman (an applicant or employee) unfavorably because of pregnancy, childbirth, or a medical condition related to pregnancy or childbirth.

It is unlawful to harass a person (an applicant or employee) because of that person's sex. Harassment can include "sexual harassment" or unwelcome sexual advances, requests for sexual favors, and other verbal or physical harassment of a sexual nature.

Harassment does not have to be of a sexual nature, however, and can include offensive remarks about a person's sex. For example, it is illegal to harass a woman by making offensive comments about women in general.

Although the law doesn't prohibit simple teasing, offhand comments, or isolated incidents that are not very serious, harassment is illegal when it is so frequent or severe that it creates a hostile or offensive work environment or when it results in an adverse employment decision (such as the victim being fired or demoted).

The harasser can be the victim's supervisor, a supervisor in another area, a co-worker, or someone who is not an employee of the employer, such as a client or customer.

HOW DOES MEDIATION WORK UNDER REDRESS
pub-94 - EEO Process - How does Mediatio[...]
Adobe Acrobat document [1.3 MB]

How do I file an EEO?

Below you will find steps needed to Access Information regarding the EEO process through the USPS LiteBlue Portal.

To access this portal you will need your Employee ID (EIN) and Password to LiteBlue. You can access the United States Postal Service LiteBlue Page at the following link:

Once logged in you will have to click on the My HR link at the top left corner of the page: 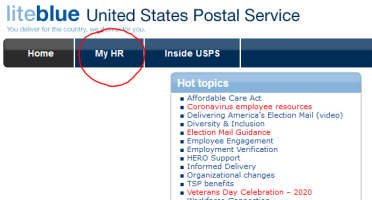 Once on the My HR page click look for the Learn about EEO link in the middle of the page and click on "More":

From here you can find information about the EEO Process. If you still believe you have a claim and want to file an EEO click on the following link:

You will find yourself on the login page. If this is the first EEO you are filing you will need to register before proceeding.